The armed forces and the National Disiater Response Force (NDRF) so far rescued 47,227 persons in different regions of J&K. 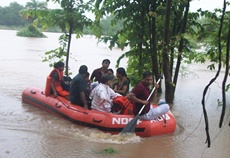 The Army has deployed 220 columns of its personnel for rescue and relief operations, in which 135 columns deployed in Srinagar region and 85 columns in Jammu region.

More helicopters and rescue materials including boats were pressed into service today.

They have distributed 7,200 blankets and 210 tents. The Army also distributed 42,000 litres of water, 600 kilograms of biscuit, 7 tonne baby food and 1,000 food packets in the flood-affected areas.

Additional water bottles are being airlifted from Chandigarh and Delhi. In order to meet the shortage of food in the flood-affected area, cooked food including biscuits are being sent from Delhi, Ahmedabad and Hyderabad on a large scale. 80 medical teams of the Armed Forces Medical Services have also swung into action.

So far 451 sorties hyave been undertaken by the helicopters and aircraft and 563 tonnes of relief materials dropped by the Indian Air Force. Altogether 61 aircraft and helicopters have been pressed into action.

135 Army boats and 148 NDRF's inflatable boats are involved in the rescue operation.

State telecom operator BSNL with the assistance of the Armed Forces is working to restore its mobile services through a satellite network and the telecom network. Besides, Air Force communication equipment and a team from private telecom companies are being airlifted from Delhi. 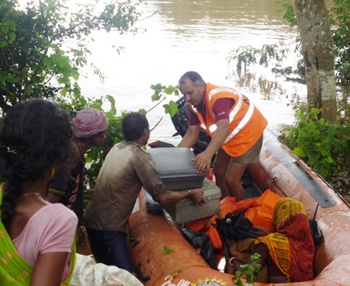 Work between Kishtwar and Sinthan Pass is in progress and Jammu to KM 172 is open for light vehicular traffic.

Fifteen engineering task force teams along with boats and other lifesaving equipment have already reached the flood affected areas to supplement the rescue operation. The situation is being continuously monitored and progress of the events are updated at the office of the HQ Integrated Defence Services in New Delhi.