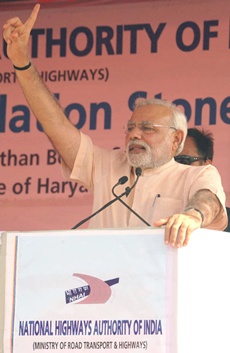 Prime Minister Narendra Modi has invited ideas from the people on shaping a new institution to replace the Planning Commission which, he feels, is no longer relevant to the new style of governance.

He said a special open forum has been created on the website `mygov.nic.in' for suggestions on the new institution.

"We envision the proposed institution as one that caters to the aspirations of 21st century India and strengthens participation of the states.... Let the ideas flow," the prime minister said.

Since he took over in May, Narendra Modi has promised to cut red tape, fight corruption and make India a place where doing business is easier so that the economy gets moving after years of slowing growth.

Last week, he announced plans to replace the Planning Commission, a lingering vestige of India's early attempt to mimic the Soviet command economy, with a modern institution to reflect a shift to a market-based economy where the states were the main drivers of growth rather than a central body.

The decision to involve the public is the latest of Modi's efforts to break down governance structures that Indians see as failing them.

He has chosen to communicate to people via Twitter and Facebook, shunning mainstream media. He has asked bureaucrats to approach him directly with their ideas, bypassing government protocols.

Modi says his measures are meant to improve the performance of a broken government. But his critics contend there is no sign of real change in the first 80 days of the new administration and that the shift so far has been only in style.

Modi won a landslide victory in general elections on a promise to revive economic growth that has fallen below 5 per cent and control runaway prices.

So far, there have been little signs of more serious, big-bang reforms required for breaking out from a cycle of low growth and high inflation.

Laying the foundation stone for four-laning of the Kaithal-Narwana-Hisar-Rajasthan Border Highway at Kaithal, in Haryana, the prime minister termed corruption as a disease worse than cancer and vowed to uproot it from the country with the support of the people.

He said corruption survives more because of the indifference of the people.

"Should corruption be removed from society," Modi asked the assembled people. "Will you support me, if I take harsh steps to remove it," he asked? Amid applause, he declared that he would rid the country of corruption, with the support of the people.

He said the "Mera Kya, Mujhe Kya" attitude had taken the country on the path of destruction, and it had to be ended immediately. The nation is not willing to bear these ills much longer, he added.

Highlighting the importance of infrastructure in the development of nations, the prime minister said Haryana provided a good example of this. The stretch of land on both sides of National Highway-1 (which runs through Haryana) has developed well, but beyond that, one can see lack of development in the state.

The prime minister said youth needed employment opportunities, and development was essential for generating employment. He said the large gathering at the function venue is proof that the people are interested and keen for development. They want to join the whole world on the path of development, he added.