India has called off secretary-level talks with Pakistan after its high commissioner Abdul Basit met Kashmiri separatist leader Shabbir Shah in the first of a series of planned meetings, saying the envoy's meeting with separatists just a week ahead of the planned talks sends out wrong signals about Pakistan's intentions. 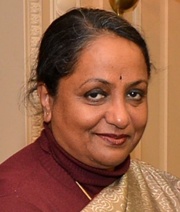 India's foreign secretary Sujatha Singh today informed the Pakistan high commissioner of the cancellation of her talks with Pakistan counterpart slated for 25 August in Islamabad.

She was to meet Pakistan's foreign secretary Aizaz Ahmad Chaudhry to raise concerns about these repeated ceasefire violations by Pakistan's armed forces in Jammu and Kashmir.

Shah, who is the leader of the third faction of the Hurriyat, told the media in New Delhi that the talks needed to be trilateral rather than bilateral to be effective and that he hoped India accepted Kashmir as a "disputed region."

The Pakistan envoy has invited Hurriyat Conference chairman Mirwaiz Umar Farooq as also the head of the hardline faction of the outfit, Syed Ali Shah Geelani for consultations in Delhi on 19 August, according to Shah.

Pakistan has undertaken such provocative moves ahead of any major diplomatic initiative with India earlier as well. However, Islamabad broke the tradition when Pakistan Prime Minister Nawaz Sharif visited India to attend the swearing-in ceremony of Prime Minister Narendra Modi in May this year.

''At a time when serious initiative was taken to take bilateral ties forward, invite to Hurriyat leaders raises questions about Pak's sincerity,'' Syed Akbaruddin, official spokesperson of the ministry of external affairs, said.

The unprovoked shelling continued through the night.

Although Prime Minister Narendra Modi did not mention Pakistan in his Independence Day speech, during his visit to Jammu and Kashmir three days ago, Modi had said that Pakistan, "has lost the strength to fight a conventional war, but continues to engage in the proxy war of terrorism."

Talks between the two countries were suspended after the beheading of an Indian soldier by Pakistani troops in January 2013.