Prime Minister Narendra Modi on Friday announced the launch of the 'Jan-Dhan Yojana', under which a person who opens a bank account will get a debit card with an overdraft facility of up to Rs5,000 and the family will get an automatic Rs1 lakh insurance cover to tide over any unforeseen eventuality. 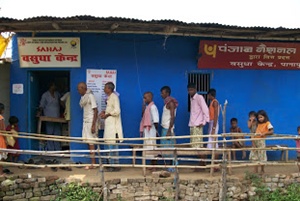 The scheme, which is intended to offer banking facilities to the poorest of the poor in the society and offer them financial security, will have positive spillover effects on the structural transformation of the economy in the long-run.

Addressing the nation in his maiden Independence Day speech on Friday, the prime minister said, "We want to integrate the poorest of the poor with bank accounts with 'Pradhanmantri Jan-Dhan Yojana'."

People in the country have mobile phones but do not have bank accounts, and this scenario needs to be changed, Modi said.

The success of the Jan Dhan Yojana, however, would depend on how fast financial service providers improve their delivery, financial sector executives said.

"The magnitude of challenge under financial inclusion can be gathered from the fact that only 58.7 per cent of the households in the country have access to banking services. In this background, the launch of the 'Jan-Dhan' scheme is a welcome step," SBI chairperson Arundhati Bhattacharya said.

Going forward, Bhattacharya said, the rapid financial inclusion will help reduce the usage of cash in the country in line with that of the developed countries such as the United Kingdom, where it is 2 per cent, Australia (3 per cent) and Japan (6 per cent).

"The positive spillover from this structural transformation in the long-run will be enormous. This apart, the move towards digital India will make good use of cost-effective cellular technology in future banking growth," she noted.

The Jan-Dhan Yojana, under which 150 million bank accounts will be opened for 75 million poor families, with an overdraft facility of Rs5,000 and accident insurance of Rs1 lakh, will be imparted in two stages.

Besides helping the government implement its financial inclusion plan, the scheme will help improve insurance penetration through the `Sansad Adarsh Gram Yojana'.

Insurance executives say this would also help them reach new regions and boost penetration in the non-life segment.

Non-life insurance premiums as a percentage of gross domestic product in India are 0.8 per cent against the world average of 2.8 per cent, according to a recent Swiss Re study.

Public sector general insurance companies are expected to play a major role in the financial inclusion initiative of the government. ''We will use our micro-offices across the country and also use our network of business correspondents to provide insurance cover,'' G Srinivasan, chairman and managing director of New India Assurance, said.

Banks have already embarked on the first phase of the financial inclusion by drawing up a roadmap for providing services in every village with a population of over 2,000, Starting March 2010, the banks have covered over 75,000 unbanked villages so far.

For the second phase, a roadmap has been prepared for covering the remaining unbanked villages. About 4,90,000 unbanked villages with less than 2,000 people have been identified and allotted to various banks.

Industry officials said while bank accounts would be opened in the first stage, insurance would come in the second phase. Though public sector companies would provide accident insurance initially, sources said this would be opened up to private insurers later.

The earlier United Progressive Alliance government had proposed the setting up of at least one office of the Life Insurance Corporation (LIC) of India in all towns with populations of over 10,000 and an office of at least one public sector general insurance company by March 2014.

Public sector insurers had opened more than 3,000 small offices in 2013-14 in smaller towns.

The model for financial inclusion is based on the Census 2011. Of the 246.7 million households in the country, 144.8 million have access to banking. In 2013, 14 state-run banks set up 7,840 branches across the country, one in four in the countryside.