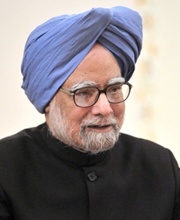 A day after informing Parliament that the PMO under Manmohan Singh had pushed for extension to a judge facing corruption charges, the government today demanded a "categorical" statement from former prime minister Manmohan Singh on the controversial matter of the UPA government pushing for extension of the term of office of a judge of the Madras High Court who was facing corruption charges.

Parliamentary affairs minister M Venkaiah Naidu said the whole account of the affair, first brought out by former Supreme Court judge Markandey Katju, showed how the government was functioning during the UPA regime.

Speaking to reporters, he said, the UPA government was trying to compromise on each and every issue. He also questioned the silence of Manmohan Singh.

"His silence is an indication that there is something to hide. So in the interest of justice, the former prime minister should come out and make a categorical statement about what exactly has happened.

He said people of India have a right to know all these things and as to what pressure he was really under.

"All these things people of India have got a right to know. That will help enhance the image of the judiciary and also remove the misgivings if any by such a statement from the former PM," Naidu said.

Law minister Ravi Shankar Prasad had on Tuesday informed Parliament that the Prime Minister's Office (PMO) under Manmohan Singh had written a note, asking why the Supreme Court collegium had not recommended extension for a Madras High Court judge who was facing corruption charges.