A truant monsoon is likely to play havoc with the Narendra Modi government's reform plans with drought-like conditions prevailing across the country adding to inflationary pressures in the economy. 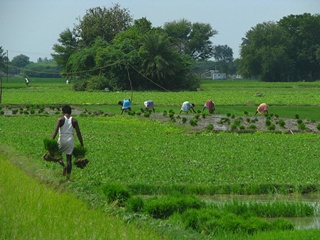 With monsoon rains coming to a standstill over the past 10 days, the prospect of fighting food inflation in the NDA government's very first year is posing a big problem for the new government.

The country has received 45 per cent lower rainfall so far since the start of the monsoon, compared to the average during the first spell of the monsoon last year. The rainfall received in June so far is also the lowest in 100 years.

The Indian Meteorological Department (IMD) said on Wednesday that only 43.4 mm of rainfall was recorded between 1 and 17 June, as against the normal rain of 78.8 mm.

''Out of 36 meteorological subdivisions, the rainfall has been excess over 01, normal over 07 and deficient over 18 and scanty over 10," the department said.

The government on Wednesday announced minor increases in the minimum support prices of the main kharif crops in a bid to encourage farmers to take up cultivation in a big way. But that may not help with parched fields threatening oilseeds, pulses and paddy crop and prices of vegetables already on the rise.

And all this is happening even before the setting in of the El Nino, a weather phenomenon that affects the southwest monsoon.

As a measure to fight food inflation, the government has already curbed export of onions, released more rice from government warehouses and spoken to state governments regarding a crackdown on hoarding, but these measures won't help improve production.

The water level in the country's biggest reservoirs has also fallen appreciably. While the water level is currently close to last year's level, it has sharply come down from the one recorded at the start of June.

On 1 June, the water level in the reservoirs was about 33 per cent higher compared to last year. If the monsoon doesn't revive or progress as expected, it could lead to scarcity of water in several regions, say experts.

The IMD had, in April, predicted a below normal monsoon at 95 per cent, but it now seems to be an underestimate.