Telugu Desam Party (TDP) chief N Chandrababu Naidu was sworn in on Sunday as the first chief minister of residual Andhra Pradesh state after bifurcation; less than a week after K Chandrasekhar Rao took oath as the chief minister of the new state of Telangana. 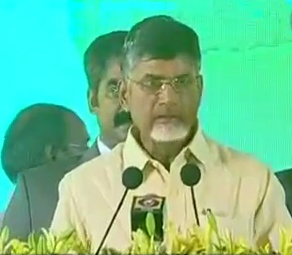 Another 19 ministers were sworn in along with Naidu by Governor E S L Narasimhan at a jam-packed public event in Nagarjuna Nagar, 18 km from Vijaywada.

Naidu took the oath of office in Telugu at 7:27 pm, the auspicious "muhurtam (moment)" set for the occasion, amid thunderous cheers by party workers.

The TDP is in alliance with the BJP in the National Democratic Alliance government at the centre; and according to reports, the TDP has given two state cabinet berths to the BJP.

On the road to power, the TDP had bagged 102 seats in the 175-member Andhra Pradesh assembly in the recent elections, while ally BJP had won four seats.

Naidu, 64, had earlier served as the chief minister of undivided Andhra Pradesh from 1995 to 2004. He was the leader of opposition in the state for nearly a decade.

Earlier on Sunday, Prime Minister Narendra Modi extended his best wishes to Naidu and assured him of "all possible help".

"As Chandrababu Naidu takes oath as CM of Andhra Pradesh this evening (Sunday), I convey my best wishes to him and his team in developing the state," Modi tweeted.

"The centre is committed to extending all possible help to the people and government of Andhra Pradesh," he added.

Residual Andhra will start its journey under Naidu with a deficit budget of about Rs14, 500 crore.

For 10 years, Hyderabad will serve as the common capital for Telangana and Andhra Pradesh. Guntur or Vijayawada, two major towns separated by just 35kms, could be the next Andhra capital since Hyderabad will eventually go to Telangana.

Naidu's government will function from the old Andhra Pradesh assembly hall, while the present assembly hall has already been handed over to Telangana.