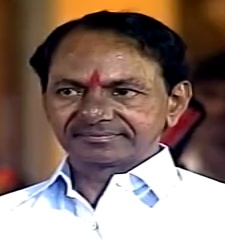 The President's Rule imposed in Andhra Pradesh was revoked partially early in the day to facilitate the swearing in of the government in the newly-created state.

Central rule will, however, continue in the residual state of Andhra Pradesh till TDP chief N Chandrababu Naidu, whose party has emerged victorious in the region, takes oath.

Chandrasekhara Rao, who quit the Telugu Desam Party and floated TRS in 2001 to champion the cause of separate statehood, was sworn in as the CM by governor ESL Narasimhan.

Earlier in the day Narasimhan, who was appointed governor of both states, was administered the oath of office by Andhra Pradesh high court Chief Justice Kalyan Jyoti Sengupta.

The 60-year-old Rao, whose party won 63 of the 119 seats in Telangana region, started off on a populist note by promising to waive farm loans up to Rs1 lakh and vowing to root out "political corruption" and establish transparency in governance.

"People of Telangana are looking forward to a progressive and development-oriented state. We will work in that direction and ensure a transparent administration," he said addressing the ceremonial parade to mark the Telangana Formation Day at the Parade Grounds in Secunderabad.

"In the next five years, the TRS government will spend Rs1,00,000 crore for the welfare on SCs, STs, backward classes and minorities. Of this, Rs50,000 crore will be spent on SC welfare alone," he announced.

There was no rejoicing in the truncated Andhra Pradesh where the TDP president and chief minister designate Naidu got only a routine invitation from the new Telengana administration.

"India gets a new state! We welcome Telangana as our 29th state. Telangana will add strength to our development journey in the coming years," Modi tweeted.

"Centre assures complete support to the people & Government of Telangana in taking the state to newer heights of progress," Modi said, as he recalled the struggle and sacrifices made in the process of creation of the new state.