Veteran BJP leader Sushma Swaraj, who became the youngest cabinet minister in Haryana government at the age of 25, in 1977, has achieved another first by becoming India's first woman foreign minister. 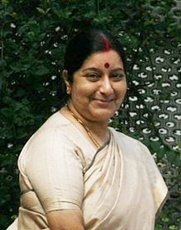 She will also handle charge of overseas Indian affairs.

Swaraj also has the distinction of being the first woman chief minister of Delhi in October 1998 and the first woman spokesperson for any political party in the country.

Swaraj is assuming the charge of the foreign ministry at a crucial time when India's growing engagement with the international community even as it is tied down by regional issues.

She began her political career with RSS student wing ABVP in the 1970s. A member of the Haryana assembly from 1977 to 1982 from Ambala Cantonment, she was a cabinet minister in the Devi Lal government.

She was minister for information and broadcasting during the 13-day Atal Bihari Vajpayee government in 1996. She resigned from the cabinet in the next Vajpayee regime to take over as the first woman chief minister of Delhi in October 1998.