Narendra Modi, who was elected leader of the BJP parliamentary party, will be sworn in as India's 14th prime minister at 6 pm on 26 May. 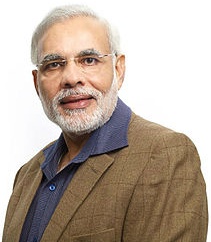 Narendra Modi, who was formally elected leader of the BJP parliamentary party earlier in the day, met President Pranab Mukherjee, who in turn handed over the letter appointing Modi as the new prime minister.

Modi will be sworn in on 26 May along with his core cabinet team as per protocol. ''The swearing-in ceremony will be held at 6pm," Modi told reporters after his meeting with the President.

Mukherjee congratulated Modi on his "grand victory" and invited him to form the government and also asked Modi to suggest names of other ministers to be sworn in on 26 May, a communique from the Rashtrapati Bhawan said.

Before that, a 15-member delegation of the Bharatiya Janata Party-led National Democratic Alliance, led by BJP veteran L K Advani, called on Mukherjee in the afternoon to tell him that Modi has been elected as the leader of the alliance.

In the morning, Modi displayed unusual emotion on his first visit to parliament's Central Hall for the meeting of his party's parliamentary party, where he was elected its leader.

Alighting from his car, he touched the entrance steps with his forehead, in a typically Hindu gesture of extreme respect, which nonetheless has probably never been seen before on the steps of parliament. He rose in deep emotion, tears visibly streaming from his eyes.

Addressing his party MPs, Modi recalled that he saw the Gujarat chief minister's office and the state's house for the first time only after he became the chief minister in 2001. He ruled the state uninterruptedly till his party won the Lok Sabha elections handsomely under his leadership.

Political pundits continue to be busy with their speculations of who will get what post in the Modi cabinet; but such speculations are fruitless till 26 May.

Meanwhile, some observers have begun wondering why it should take as much as 10 days for a new government to take over, especially after such a clear verdict, in an age when time is money.