The Election Commission on Friday decreed that the media will be allowed to publish exit polls for India's general elections on Monday after 6:30 pm Indian Standard Time (1300 GMT). 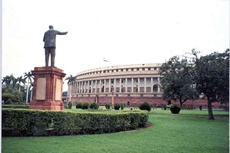 Monday is the last day of voting in the long-extended polls.

Earlier in the day, TV news channels had speculated that the EC would not allow exit polls to be unveiled until next Friday, the day on which official results are due. Today's report contradicts this.

The initial reports of a delay in exit polls had jolted investors, since markets had rallied on Friday - with shares hitting record highs - on optimism that those exit polls would show the opposition Bharatiya Janata Party winning a majority.

But Akshay Rout, an election commission official, confirmed to Reuters that exit polls would be allowed to be issued from Monday evening onward, half hour after the last poll booths close.

Despite market optimism that the Bharatiya Janata Party - which is seen by investors as being business friendly but reviled by by many for being communal - would win the election, exit polls proved unreliable in 2004 and 2009.

Some brokerages are raising margin requirements, to guard against any potential surprises, sources told Reuters.