The general elections that are held to elect representatives for Lok Sabha after every five years, requires a huge amount of resources and efforts, from planning, labour, technology, and money.

Cost wise, the 2004 general elections was the heaviest on government exchequer with about Rs1,114 crore spent in the elections. This was the elections when per elector cost was also the highest at Rs17 on an elector.

Significantly, there was increase in the election cost by 17.53 per cent vis-à-vis 1999 general elections even though there was a reduction in the number of polling stations by 11.26 per cent.

In first six general elections, the cost per elector was less than a rupee, but later elections saw rapid growth in election expenditure. With the lower value of the rupee due to inflation, the rise in cost could be attributed to increased level of democratic activities. Many political parties started into being; more independents were now participating.

The upcoming general elections would see expenditure rising further because of various voter-friendly initiatives like voter awareness campaigns, distribution of voter slip ahead of election date and the use of Voter Verified Paper Audit Trail (VVPAT) for the first time.

The entire expenditure on actual conduct of elections to the Lok Sabha is borne by government of India. But expenditure towards maintenance of law and order is born by respective state governments.

On the other hand, Indian politicians are expected to spend around Rs30,000 crore (nearly $5 billion) on campaigning for elections next month - a sum second only to the most expensive US presidential campaign of all time - in a splurge that could give India's floundering economy a temporary boost.

Election campaign spending may include cash stuffed in envelopes as well as multi-crore-rupee ad campaigns, as estimated by the Centre for Media Studies.

That is triple the expenditure the centre said was spent on electioneering in the last national poll in 2009 - partly a reflection of a high-octane campaign by pro-business opposition candidate for prime minister Narendra Modi who started nationwide rallies and advertising last year. 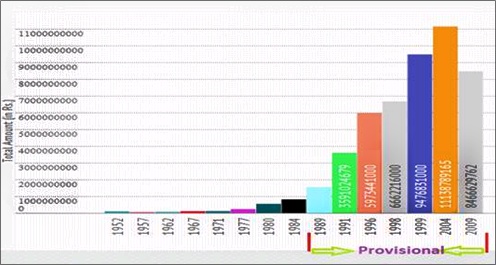