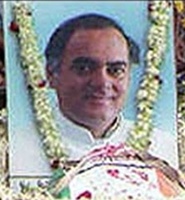 An apex court bench headed by Chief Justice of India P Sathasivam directed that the central government's plea would be heard 6 March.

The court also issued notice to the state government and the four prisoners on the Centre's plea against their release.

"Our intention is not to stop the release. We will lay down guidelines. Every state must be aware of rules and procedure to be followed," said Chief Justice Sathasivam.

The apex court had on 20 February stayed the release of three other convicts in the case - Murugan, Santhan and Arivu (See:Centre moves SC against TN move to free Rajiv killers)

- whose death sentences it had commuted to life terms on 18 February, saying there had been procedural lapses on the part of the state government on the decision to release them ( SC commutes sentence of Rajiv Gandhi killers after 11 years).

Arguing against the Centre's plea opposing the convicts' release today, the Tamil Nadu government said, "If we wanted, we could have released these four (who are serving life terms). Why should the Centre rush to court?" To which the bench riposted, "Who is rushing, you or the Centre?"

Tamil Nadu Chief Minister Jayalalithaa's announcement that she would let off the seven convicts was seen by critics as a blatantly populist move ahead of the national election three months away.

Tamil Nadu said nothing stopped it from releasing the four others serving life term, Nalini Sriharan, Robert Pious, Jayakumar and Ravichandran, which was contested by the Centre.

Prime Minister Manmohan Singh has said letting off the convicts would be contrary to all principles of justice as Rajiv Gandhi's assassination was "an attack on the soul of India."

The convicts have spent over 20 years in jail. Nalini, who was earlier on death row, was granted mercy on the intervention of Rajiv Gandhi's widow and Congress president Sonia Gandhi.

Rajiv Gandhi was assassinated in 1991 by a woman operative of the Lankan Tamil separatist outfit LTTE, who greeted him with a bomb strapped to her chest during a rally in Sriperumbudur in Tamil Nadu.

For years, the case has been linked to Tamil sentiment and all regional parties in the state have campaigned for the convicts' release.