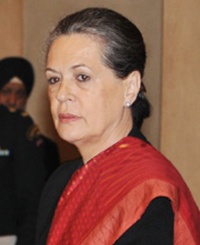 The Congress Party today hinted at a possible alliance or merger with the Telangana Rashtra Samiti (TRS) party even as Congress president and UPA chairperson Sonia Gandhi sought special status for Seemandra region after the bifurcation of the state in bid to clinch the deal.

Congress chief Sonia Gandhi, meanwhile, asked prime minister Manmohan Singh to grant special status to Seemandhara for five years so as to end the stalemate over the Telangana bill.

The bill will again be tabled in the Rajya Sabha tomorrow, the government said, as the bill could not be taken up amidst high drama and repeated adjournments all through the day.

The Congress Party which succeeded in getting the Telangana bill passed in the Lok Sabha yesterday with support from opposition BJP, could not make it in the Rajya Sabha today.

Prime minister Manmohan Singh, in a bid to reach out to the opposition ahead of tabling of the Telangana Bill in Rajya Sabha, met with BJP leaders Arun Jaitley and Venkaiah Naidu.

The government reached out to the BJP as it was worried about the proposed constitutional amendment to be moved by the opposition party. However, reports say the talks ended in stalemate.

Several members from BJP and Left parties demanded proper discussion on the bill that aims to bifurcate Andhra Pradesh into Telangana and Seemandhra. Some other issues were also raised leading to commotion and disturbances because of which the House had to be adjourned repeatedly.

Minister of state for parliamentary affairs Rajiv Shukla assured the House the government too was in favour of a discussion on the bill before its passage.

The House, however, witnessed unruly scenes today with the secretary-general Shumsher K Sheriff being heckled by a TDP member C M Ramesh, while trying to snatch papers from him related to Telangana bill.

Ramesh and his party colleague, who are opposing the bill, stormed the Well as soon as the House met at noon after the first adjournment on the issue.

There was heckling and even the spectacles of Sheriff were about to fall as Ramesh tried to forcibly take the papers.

Meanwhile, reports said the Congress is planning a merger with TRS once the Telangana bill is passed in the Rajya Sabha as well.

''All reasonable options are open'' a Congress leader is reported to have said about possibilities of alliance with or merger of TRS.