Arvind Kejriwal the `aam admi' who rode to power in the capital state, taking over as the first non-Congress, non-BJP chief minister of Delhi, is back as aam aadmi, two months after he assumed power. Kejriwal resigned as Delhi chief minister after a big showdown in Delhi assembly over the tabling of the Jan Lokpal Bill. 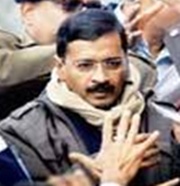 The man who made possible a seismic shift in Indian politics and shaken things is back again to address packed gatherings on the streets after realising the subtleties of India's murky party politics.

Arvind Kejriwal reportedly submitted his resignation letter to Lieutenant General Najeeb Jung after the Congress and the Bharatiya Janata Party blocked the tabling of his pet legislation, the Jan Lokpal Bill.

The assembly was specially convened to pass the anti-graft legislation after the law ministry made it clear that it was necessary to take the central government's consent before introducing the bill in the assembly.

The centre's representative Lieutenant Governor Najeeb Jung had declined to give consent for the introduction of the bill; the speaker also did not permit the tabling of the bill.

But, with 42 MLAs voting against, the bill could not be introduced.

The first day of the session saw a stormy start with BJP and Congress repeatedly disrupting the proceedings in a concerted effort to block the introduction of the anti-graft legislation, forcing the speaker to adjourn proceedings of the House.

"They know that if this law is brought in, their leaders will end up in jail," Kejriwal said to a cheering group of supporters at his party office in the evening.

"I am sorry if I have hurt anyone," Kejriwal said, addressing the assembly after the Jan Lokpal Bill could not be introduced, adding,  "This could be our last assembly session. Willing to quit CM's post thousand times for Jan Lokpal Bill."

Kejriwal said perhaps the FIR against Mukesh Ambani would have hurt both Congress and the BJP.

"Kejriwal and other senior party leaders will attend the meeting after the (assembly) session. We will discuss the next course of action," party leader Yogendra Yadav said.

He also said a message has been conveyed to party volunteers to reach the party office to attend the meeting.

Congress, reacts to Kejriwal's claims, saying it has not brought down the government.

"We always supported AAP for bringing financial Bill. Even for Jan Lokpal Bill, we voted for LG's stand. We wanted to abide by the Constitution," Arvinder Singh Lovely said.

Commenting on the developments that took place in the Delhi assembly AAP leader Yogendra Yadav said it was extremely clear now that the Congress and the Bharatiya Janata Party (BJP) were united in context of the Jan Lokpal Bill.