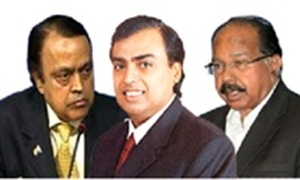 At the same time, Kejriwal also shot off a letter to Prime Minister Manmohan Singh, requesting him to keep in abeyance the union government's decision to hike the prices of domestically produced gas from 1 April till the probe in the case is completed.

The FIR was registered by the Delhi ACB after Kejriwal said publicly on Tuesday that the agency has been told to probe the alleged collusion of these entities in inflating prices of natural gas from the RIL-operated Krishna-Godavari basin. (See: Kejriwal trains guns on Ambani, Deora, Moily over gas pricing)

Kejriwal hasalleged that RIL's gas price is not based on cost of production, and that the company has created an artificial shortage of fuel in the country. He said the company is charging double for the gas from the K-G Basin and making windfall profits.

He demanded that hike in price of natural gas from 1 April, as mandated by the union government, must be kept in abeyance, adding that if the price of domestically produced natural gas is hiked, there it will have a cascading effect on the prices of essential commodities.