The Supreme Court today ordered the government to resolve within a week its stand on whether or not the stringent anti-piracy law should be evoked against two Italian marines accused of killing two Indian fishermen off the Kerala coast in 2012. 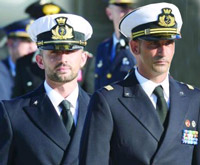 A bench headed by Justice B S Chauhan directed the Centre to end the logjam in the issue, in which ministries of law, home affairs and external affairs are involved, and make its stand clear on 10 February, the next date of hearing.

''Will you be able to end the logjam by next Monday? Don't expect us to grant adjournment on the next date,'' the bench said.

Senior advocate Mukul Rohatgi, appearing for Italian government and the marines, submitted that the Centre has not been able to proceed in the case even though 13 months have lapsed since the Supreme Court passed the order for conducting day-to-day proceedings on the issue, and pleaded that the marines should be allowed to go back to Italy.

He submitted that marines should be allowed to go back to their country. The marines were part of a military security team on a cargo ship in 2012 when they fired at the fishermen, saying they mistook them for pirates.

Attorney general Goolam E Vahanvati countered that the union government has ''almost'' resolved the issue and will respond on the next date of hearing.

The bench was hearing a petition filed by Italian government challenging invoking of the anti-terrorism law SUA, or Suppression of Unlawful Acts against safety of Maritime Navigation And Fixed Platforms on Continental Shelf Act, saying it is against the order of the same court which allowed proceedings only under the Maritime Zone Act, the Indian Penal Code, the Criminal Procedure Code, and UNCLOS.

The joint petition, filed by Italy's ambassador to Delhi Daniele Mancini along with the Italian marines Massimiliano Latorre and Salvatore Girone, also sought the court's direction to the Centre and the National Investigation Agency to expedite the proceedings in the case or discharge the marines.

During the last hearing on 20 January, the apex court had adjourned the case after Vahanvati submitted that the Centre was trying to resolve all disputes with Italian government on the issue.

Italy is insisting that the men be sent back to Italy while awaiting the start of the trial.

Vahanvati blamed the delay in the government's stand on witnesses who were on board the cargo ship when the shooting took place but had not come to India to give evidence, despite promising that they would do so when required to do so by the court.