The Andhra Pradesh assembly has rejected the bill to create a separate Telangana state, in move that would embarrass the Congress-led UPA government at the centre. 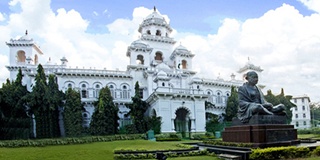 The Andhra Pradesh Assembly rejected the bill today, the deadline set for the state legislature to pass or reject the bill and send its opinion to the President.

Chief minister N Kiran Kumar Reddy moved a resolution seeking to reject the Telangana bill, which the assembly passed by a voice vote.

The chief minister had earlier threatened to quit politics if the Parliament passed the Telangana bill, which would lead to the state's bifurcation.

The state assembly has not conducted any business for the past few days following protest by legislators from Telangana cutting across party lines.

The bill for the creation of a separate Telangana state within the present Andhra Pradesh state was referred to the state legislature on 12 December last year for its opinion under Article 3 of the Constitution after the bill received President's assent.

Shops, business establishments and educational institutions remained closed in response to the shutdown called by opposition Telugu Desam Party (TDP) in all 13 districts of Seemandhra.

TDP legislators from Seemandhra also staged a sit-in at the statue of Ambedkar in the assembly premises to support the shutdown.