UP to roll out 'Z' level security at Kejriwal's Ghaziabad home 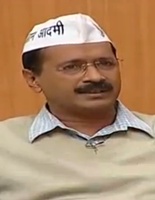 The Ghaziabad police have decided to provide the highest 'Z' level security at the residence of Delhi Chief Minister and Aam Admi Party chief Arvind Kejriwal, despite his consistent rejection of the kind of security that top politicians take for granted.

Senior Superintendent of Police Dharmendra Singh told newspersons on Sunday that Kejriwal would have 30 police personnel deployed round the clock during his movements in the Uttar Pradesh district. Kejriwal's family home is in the Girnar Apartment complex in the Kaushambi area of Ghaziabad town.

"Despite the Delhi CM's refusal, we have decided to provide him with 24-hour Z category security. Two head constables and eight constables will be deployed outside Kejriwal's house from tomorrow (Monday). Besides, two personal security officers will also be posted at his residence as part of the Delhi CM's security detail," Singh said.

Singh said that he was following the Uttar Pradesh government's orders issued on Saturday.

Union home minister Sushilkumar Shinde said last week that Kejriwal, Delhi's youngest-ever chief minister at the age of 45, is getting 'discreet' security cover in Delhi too, without his direct knowledge.

The security authorities believe that the main threat to Kejriwal is not from terrorists or fanatics, but from shady businessmen and colluding officials whose cosy nests are likely to be disturbed by his strong stand against graft.

Kejriwal has made a point of shunning the trappings of high office that the average Indian citizen, struggling to make ends meet, finds deeply offensive.

But as was the case with Mahatma Gandhi's insistence on travelling third class, the authorities say providing Kejriwal with security on the quiet takes up more manpower and resources than if he would simply cooperate.