The Lokpal bill today received Parliament's approval with the Lok Sabha adopting the amendments made by the Rajya Sabha after a short discussion, much to the relief of activists who have been fighting for the crucial ant-graft legislation. 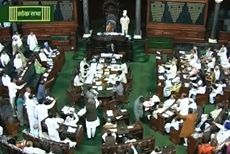 Gandhian Anna Hazare, who has been fasting in his native Ralegan Siddhi in Maharashtra's Ahmedabad district since 10 December, called of his protest after the lower house also approved the bill.

The Lok Sabha passed the anti-graft legislation with voice vote despite the din created by pro- and anti-Telangana members and protests over the brutal treatment meted out to a lady diplomat in the US.

Members belonging to the Samajwadi Party and the Shiv Sena opposed the bill and walked out in protest.

Most other opposition parties, including the Left and the right wing Bhartiya Janata Party, supported the legislation.

Addressing the Lok Sabha, Congress vice president Rahul Gandhi said, "I appeal to all political parties to support the Lokpal bill." The 15th Lok Sabha should pass the six bills that are pending, Rahul Gandhi added.

Initiating the debate on the bill, leader of the opposition Sushma Swaraj said, "It will be a historic moment if the Lokpal bill is passed today." She slammed the UPA allies for creating ruckus and wasting valuable time of Parliament.

Anna Hazare, meanwhile, said people have to be vigilant over the implementation of the Lokpal bill after it was passed into law.

"People have to be vigilant. Only then will they benefit from this law," Hazare said minutes before ending his fast.

"We want to form committees of retired judges, top cops to suggest and monitor the implementation of Lokpal. Only a law will not help. We have to see how the Lokpal is implemented,'' he said.

He thanked the media for playing its role as a strong fourth pillar that is necessary for any democracy.

Hazare also thanked the government and members of Parliament (except those from Samajwadi Party) for passing the Lokpal bill.

"I want to thank Parliament's Select Committee for strengthening the Lokpal Bill. All parties supported this Lokpal bill for the benefit of the society, the country, I thank them. Through this Lokpal bill fourty to 50 per cent corruption can be controlled, poor will get justice," he said.