Rajya Sabha today passed the historic Lokpal bill, bringing some relief to the 45-year-long battle against unregulated corruption in government and politics, although the amended version still needs a discussion in the Lok Sabha. 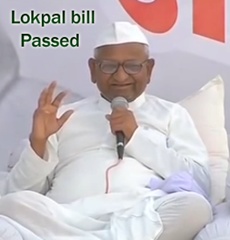 The Lokpal bill passed in the Rajya Sabha today, provides for the setting up of anti-graft ombudsman `Lokpal' at the centre and asks states to establish `Lokayuktas' in a year's time once the bill is passed and signed into law.

The Lok Sabha had passed the Lokpal bill towards the end of the winter session of 2011, but the Rajya Sabha, where it was debated, could not vote on it as the House was adjourned earlier.

However, a select committee of the Rajya Sabha had made some changes in the bill, which were incorporated and approved by the union cabinet.

Law minister Kapil Sibal called it a historic moment, although he stressed that corruption could not be removed by the Lokpal alone.

"Law alone will not lead to elimination of corruption. Law will help deal with those who are corrupt, but it will not deal with the impetus to be corrupt. It will just be a deterrent," he said.

For effectively dealing with corruption, the "supply side" should also be effectively checked, as pointed out by Communist Party of India-Marxist (CPM), he said, adding that a bill amending Prevention of Corruption Act, pending with Lok Sabha, provides to deal with this.

Rajya Sabha chairman Hamid Ansari moved the motion on amendments suggested by political parties on the Lokpal Bill. The bill will now have to be sent to the Lok Sabha for approval of the changes.

The Lok Sabha will debate the bill tomorrow.

Anti-corruption crusader Anna Hazare thanked members of Parliament for passing the bill and said he would end his fast once the Lok Sabha also approved the bill.

"My best wishes are with the Lokpal that politicians like Lalu Prasad Yadav and Mayawati are supporting and also with Rahul Gandhi, who has been fighting for the Lokpal from such a long time, as he said," he said.

"I request Lok Sabha members to pass Lokpal Bill," Anna said and added, "Anna is not demanding this bill, it is the people of the country who want the Lokpal bill to be passed."

Aam Aadmi Party (AAP) leader Kumar Vishwas, meanwhile, hit out at political parties for tampering with the provisions of the bill and blunting its focus by excluding three crucial points.

The three points are that  all officers would be liable to be investigated by the Lokpal. The second is the citizen's charter according to which government organisation will have to give the public a time frame in which they will have to complete the work assigned, exceeding which they will be fined or punished. Thirdly, a strong Lokpal at the centre based on which the Lokayukta will be formed in each state.

"The three crucial points are missing from this Lokpal bill. It will not help reduce corruption or send any corrupt person to jail. The political parties of this country are to be blamed for this and for tampering with the movement for Lokpal," said Vishwas.