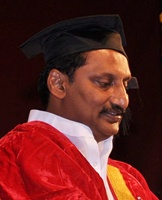 The ruling party at the centre seemed to be losing its moorings in Andhra Pradesh with chief minister Kiran Kumar Reddy also joining the chorus against bifurcation of the state even as ministers and members of Parliament from Seemandhra threatened to withdraw support to the UPA government.

Kiran Kumar Reddy on Friday urged his colleagues in the state government to join the opposition TDP and breakaway YSR Congress in opposing the division of Andhra Pradesh.

In fact, the chief minister convened a meeting of ministers and MLAs from Seemandhra region to coordinate action against the centre's decision to move ahead with the bifurcation of Andhra Pradesh.

The meeting, convened in the backdrop of the Union cabinet clearing the draft Telangana Bill, also decided to authorise senior ministers Anam Ramnarayana Reddy, N Raghuveera Reddy, Ganta Srinivasa Rao and S Sailajanath with coordinating action along with other parties opposing the bifurcation of the state.

The CM asked his ministers to be ready with facts to counter the bill in the assembly. He also cited Article 3 of the Constitution to emphasise the special importance attached to the word "view of the Assembly".

He also announced plans to move the Supreme Court to challenge the union cabinet's decision to bifurcate Andhra Pradesh once the bill reaches Parliament.

Meanwhile, actor-turned-politician K Chiranjeevi has tendered his resignation as union tourism minister over the issue of bifurcation of Andhra Pradesh for the creation of Telangana. He has written to Congress president Sonia Gandhi, seeking acceptance of his resignation.

It is not known why Chiranjeevi opted to write to the Congress president instead of submitting his resignation to the prime minister.

In his letter, Chiranjeevi has stated that he was "pained with the sequence of events in the process of bifurcation" of Andhra Pradesh. He said the centre opted to ignore the aspirations of the people hailing from Seemandhra region.

Chiranjeevi, a known opponent of the Andhra bifurcation plan, had earlier sent his resignation to Prime Minister Manmohan Singh through a fax when the union cabinet first announced the decision to create a Telangana state.