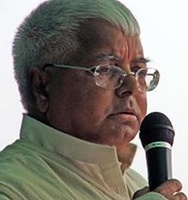 A special CBI (Central Bureau of Investigation) court in Ranchi today found Rashtriya Janata Dal chief and former Bihar chief minister Laloo Prasad Yadav guilty of peculation in what has become known as the fodder scam – which means that he must forfeit his seat in parliament, under a recent Supreme Court ruling.

Laloo Prasad, who was also formerly the railway minister in the union cabinet, was convicted with 44 others. He faces from three to seven years in jail; the sentencing will take place on 3 October.

The fodder scam relates to Bihar's agriculture and animal husbandry department, which siphoned off a reported Rs950 crore of funds meant for subsidised cattle fodder some 17 years ago.

Prasad and the others were charged with fraudulent withdrawal to the tune of Rs37.7 crore on fake fodder bills from the Chaibasa treasury in the 1990s in a case lodged and investigated by the CBI.

Chaibasa was part of the then undivided Bihar.

Laloo Prasad Yadav, 66, was present in court when the verdict was delivered. Among his fellow convicts are seven more politicians and four bureaucrats. The sentence will be announced on Thursday through video-conferencing.

Laloo Prasad  was the chief minister of Bihar with a good majority in the state assembly when he was forced to resign in 1997 after being charged in the scam. He promptly placed his virtually illiterate wife Rabri Devi as a proxy chief minister. But in the 2005 election, he lost Bihar to Nitish Kumar of the Janata Dal (United), who has been in power ever since.

The conviction could have major ramifications for politics in Bihar, where Laloo Yadav's RJD is still considered the number two party after the JD(U).