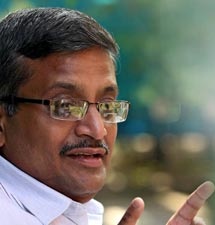 The false documents and sham deals helped Vadra to create money that he could account for, Khemka alleged.

The revelations are part of his 100-page reply submitted to Haryana government's three-member enquiry committee set up in October last to look into the Vadra-DLF deal.

Khemka, in his reply submitted on 21 May, alleged that Haryana's Department of Town and Country Planning (DTCP) had actively connived with Vadhra to make this possible.

DTCP, the IAS officer alleged, "ignored rules and regulations to allow crony capitalists operating as middlemen to flourish and appropriate market premium of a license.

"The DTCP aided Vadra in making these sham transactions."

According to Khemka, both the sale deed that Vadhra executed on 21 February 2008 through his company 'Skylight Hospitality' to buy land from 'Onkareshwar Properties' and DTPC's March 2008 Letter of Intent granting a commercial licence to his company were  "sham transactions" made to enable Vadra sell the land at a huge premium.

Khemka, who had cancelled a land mutuation deal between Vadra and DLF last October, said there was no money transaction or promise to pay in the deed, to make the deal void.

A committee appointed by the state government had also reversed the mutation of the land deal and called off the inquiry ordered by Khemka into Vadra's land deals saying these were "without jurisdiction, inappropriate and not covered under any provisions of any statute or rules."

Khemka in his reply also alleged that the DTCP had issued various types of colony licences for a total of 21,3666 acres of land over an eight-year period between 2005 to 2012 when the Bhupinder Singh Hooda government was in power.

Khemka has now demanded a white paper on the transfer of all such licences permitted in the past to expose the "loot of public wealth."

According to him, assuming Rs1 crore premium on an acre of land meant for commercial colony, the land licensing scam could be worth over Rs20,000 crore.