Telangana state to be a reality soon

Telangana state will soon be a reality after the ruling United Progressive Alliance coalition at the centre and the Congress party's decision-making body, the Congress Working Committee, unanimously cleared the proposal this evening, meeting the long-pending demand of the Telengana Rashtriya Samiti (TRS). 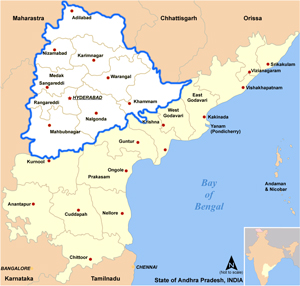 The decision for the formation of a separate Telangana state, however, was taken against strong opposition from party leaders from Andhra and Rayalaseema regions.

Once formed, Telangana will be the country's 29th state and as per current proposal, Andhra Pradesh and the upcoming Telangana will share the capital Hyderabad for the next 10 years.

This proposal, however, is unacceptable to the Telangana Rashtriya Samiti, the party that championed the movement for a new state.

The announcement of the Telangana state has been necessitated more by electoral considerations as the Congress and the UPA will be seeking a third term at the national elections due next year.

Nearly half of the 42 parliamentary seats from Andhra Pradesh are in Telangana, which could be a windfall for the Congress if voters favor.

"It wasn't an easy decision but now everyone has been heard and a decision has been taken," said senior Congress leader Digvijaya Singh, who is in charge of Andhra Pradesh.

"Hyderabad will be the shared capital of Andhra Pradesh and Telengana for 10 years," added Congress spokesperson Ajay Maken.

Andhra Pradesh chief minister Kiran Kumar Reddy, who flew back to Hyderabad after a series of meetings in Delhi, said he will be meeting with the prime minister again before a formal announcement of the formation of Telangana state.

Meanwhile, the union home ministry has rushed additional 1,000 paramilitary personnel to Andhra Pradesh to deal with any situation arising out of a decision on Telangana.

The additional forces, along with the existing 1,200 paramilitary personnel, will be deployed in Coastal Andhra and Rayalaseema regions, where protests are expected over the bifurcation of the state.

Protests demanding a "united Andhra" have been intensifying in Coastal Andhra and Rayalaseema, the other two regions that make up Andhra Pradesh along with the Telangana region.

Telangana, the largest of the three regions in Andhra Pradesh, contributes more than 60 per cent of the state's revenue and accounts for 40 per cent of its population.

In comparison, Coastal Andhra contributes 14 per cent of the state's income while Rayalaseema brings in just four per cent.

Telangana was a state of Telugu-speaking people and was known as Hyderabad State till 1956 when it was merged with Andhra State, which was carved out of the former Madras province, to form Andhra Pradesh.

Telangana comprises 10 districts that include Greater Hyderabad, Ranga Reddy, Medak, Nalgonda, Mahabubnagar, Warangal, Karimnagar, Nizamabad, Adilabad and Khammam and has a total area of 114,800 sq km. Total population of the region is about 35.28 million.

It has a contiguous area bordering coastal Andhra, Rayalaseema, Karnataka, Maharashtra and Chhattisgarh.

The region is situated at a high altitude in an up-land area and two major rivers Godavari and Krishna flow through the region, although most of the land is arid.