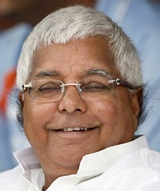 The Supreme Court has suspended proceedings in a Jharkhand court against former Bihar chief mnister and supremo Lalu Prasad in the Rs900-crore fodder scam case who alleged that the trial court judge was biased against him.

Lalu Prasad in his plea alleged that special CBI judge P K Singh, who is a relative of P K Shahi, the education minister in the Nitish Kumar government, is biased against him. He also sought the transfer of the case.

A bench headed by chief justice-designate  P Sathasivam agreed to hear the case, in which the former Bihar chief minister is an accused.

The bench said the issue raised by Yadav "requires our examination whether the allegation is correct or not" and issued notice to CBI.

"If CBI says there is no bias then we would dismiss the petition," the bench said,

The bench granted two weeks' time to CBI and the state of Jharkhand to respond to Yadav's petition and posted the matter for hearing on 23 July.

Appearing for Lalu Prasad Yadav, senior advocate Ram Jethmalani said there is apprehension of bias as the judge is related to a minister in the government of Nitish Kumar, "who is his (Yadav's) biggest political enemy".

Yadav moved the Supreme Court after the Jharkhand High Court on 1 July dismissed his plea to transfer the case to another special CBI court.

The trial court was expected to pronounce the judgement in the case pertaining to alleged fraudulent withdrawal of Rs37.7 crore (from Chaibasa treasury in the 1990s) on 15 July.

The Rs900 crore fodder scam involving transfer of large amounts from the Bihar state exchequer for purchasing fodder and medicines for non-existent livestock first surfaced in 1996.

Of the 61 cases, around 54 were transferred to Jharkhand when it was carved out of Bihar in November 2000.

Different CBI courts have passed judgment in 43 cases so far.