The union cabinet today approved an ordinance to implement the UPA government's Food Security Bill in the absence of a clear mandate in the Parliament and opposition from key alliance partner NCP led by agriculture minister Sharad Pawar. 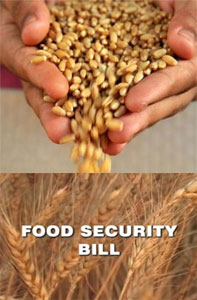 The ordinance, which was pushed through at a cabinet meeting today, will now be sent to President Pranab Mukherjee for approval.

Once the President signs it, the ordinance will come into effect immediately. The government, however, will have to replace the ordinance with a proper legislation in Parliament within six months.

The food security ordinance, however, lacks provisions for its implementation, which are yet to be worked out, and is unlikely to be implemented immediately.

The ordinance also faces opposition from UPA supporters like the Samajwadi Party, which said it will not support the food security bill whether introduced when this government exists or later.

"It seems that the government is in a hurry to pass the bill, we will not allow the passage of the bill without a debate in Parliament. It must be discussed and we will never support such a bill, whether this government stays or not," SP said.

The food security bill that assures subsidized foodgrains to 60 per cent of the country's population, was tabled in the budget session of Parliament, but could not be taken up for discussion due to pandemonium in the Lok Sabha over various scams involving the government.

The ordinance will guarantee 5 kg of rice, wheat and coarse cereals per month per person at a fixed price of Rs3, 2, 1, respectively.

It also entitles about 24.3 million of the country's poorest of the poor covered under the Antyodaya Anna Yojana (AAY) scheme under the public distribution system to 35 kg of foodgrains per family per month.