The government has made yet another faux pas with selection of defence secretary Shashikant Sharma as the new Comptroller and Auditor General (CAG) of India, in place of retiring Vinod Rai. 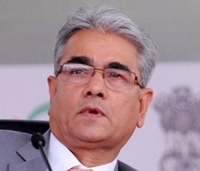 With the man, whose reports on 2G spectrum and coal blocks have shaken the government, retiring tomorrow after five-and-half years in office, a harried government seems to be looking for some respite.

The President of India has appointed Shashikant Sharma as the Comptroller & Auditor General of India, an official release said today.

"The President of India has appointed Shashi Kant Sharma, IAS, as the Comptroller & Auditor General of India, in terms of Article 148 (1) of the Constitution of India," the Finance Ministry said in a statement.

The 62-year-old Sharma will be administered the oath of office by President Pranab Mukherjee on Thursday.

Sharma, who holds a masters degree in political science from the University of York, will be taking over charge of the CAG from May 23, it said.

Sharma, who will take over charge as the Comptroller & Auditor General of India from 23 May 2013, will have to review major defence deals such as the Agusta Westalnd helicopter deal.

Aam Aadmi Party leader and senior lawyer Prashant Bhushan, however, has challenged Sharma's selection as the new CAG, terming it ''illegal and unconstitutional''.

The defence secretary's appointment as the CAG would cause ''conflict of interest'' as the CAG has to audit its own defence accounts as well.

How would Sharma audit the accounts of the defence department since he was director-general of acquisitions in the defence ministry when major defence deals such as the Agusta Westalnd helicopters, Scorpene submarines -  which are under probe - took place? Bhushan asked.

Addressing a press conference in the capital, Bhushan alleged 'conflict of interest' in his appintment as CAG as Sharma was the director general of defence acquisitions during 2003-10, when major defence deals were signed.

''Will he conduct a fair audit of the purchases cleared during his tenure?'' Bhushan said, adding, ''such a long period for a bureaucrat in the same Ministry is unusual.''

He said his party would ''seriously consider'' challenging Sharma's selection in court, as it 'compromised' the principle of 'institutional integrity' laid down by the Supreme Court.

The Supreme Court had, in 2011, struck down the appointment of PJ Thomas as Chief Vigilance Commissioner as there were pending charges against him in the palmolein import scam.

While the selection of Vinod Rai has been an exception to the rule, as he played a free and fearless role in handling the audit of the 2G Spectrum sale, the Coalgate and the Reliance Industries' KG-D6 basin spending, the government often followed an opaque policy in the selection of bureaucrats, Bhushan pointed out.

He also distributed copies of the Department of Economic Affairs' reply to an RTI query in which it admitted that there was no formal system for appointment/selection of CAG, which was made as per 'past conventions and practices'.

There is also no selection committee or collegium to for the selection of the CAG, which is merely based on a note moved by the finance ministry, Bhushan pointed out.

Bhushan also flayed opposition parties, such as the BJP and the media for keeping ''silence'' on such a crucial issue involving public finances.