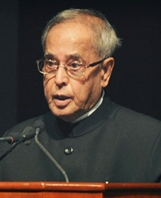 Opening the Budget session of Parliament today, President Pranab Mukherjee said in his address to a joint sitting of the Lok Sabha and the Rajya Sabha that the past year has been a difficult one for the economy.

He noted that ''Europe is in recession, while market economies' growth is slowing down.''

He stressed that there was a need to address the impact of growth hurdles.

''Indian economy is experiencing slower growth. Our slower growth is the consequence of global and domestic factors,'' the President said.

''The government is taking steps to revive growth. Persisting economic conditions are a worry for all. Also, inflation is easing gradually but is still a problem,'' he added.