Ahead of the debate and voting on allowing foreign direct investment in multi-brand retail, the government this morning expressed confidence that it had the numbers to win the vote. 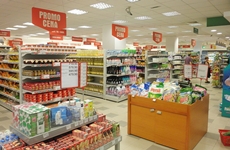 "I am confident that the motion moved by Bharatiya Janata Party in the Lok Sabha and the Rajya Sabha will be rejected. I am urging all parties not to subscribe to the politics of BJP," parliamentary affairs minister Kamal Nath told the media in New Delhi.

He avoided a direct answer on what the position of the Samajwadi Party and the Bahujan Samaj Party would take, saying only that he was confident that all parties would see through the ''politics'' of the BJP.

"They (SP and BSP) may oppose FDI. It is for the states to decide. I am confident that parties will see through the politics of BJP... We have the numbers," he said.

His remarks come ahead of the Lok Sabha taking up a motion against FDI in multi-brand retail under Rule 184, which entails voting.

The debate is likely to be initiated in Lok Sabha this afternoon by leader of the opposition Sushma Swaraj. The voting will take place on Wednesday evening after a reply by commerce minister Anand Sharma. Eight hours have been allotted to 30 speakers from various political parties for the debate.