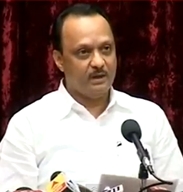 All ministers and senior party leaders of NCP met Ajit Pawar at his official bungalow `Devgiri' after he announced his resignation.

"All ministers have submitted their resignations to me. Sharad Pawar is not in Delhi now. I will consult him to discuss the further course of action. The legislature party of the NCP will meet at 2 pm tomorrow," Pichad said.

NCP has 20 ministers in the Democratic Front government, including the deputy chief minister.

Pawar was quick to react with his resignation and said he was ready to face an investigation by the Central Bureau of Investigation (CBI).