The first India-made aircraft carrier INS Vikrant successfully completed the fourth phase of sea trials on 10 July, during which integrated trials of majority of onboard equipment and systems, including some of the Aviation Facilities Complex equipment, were undertaken. 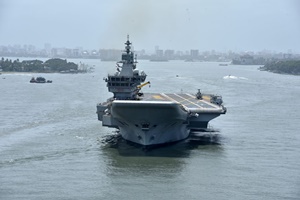 The ship’s delivery is being targeted by end-July, followed by commissioning of the ship in August, to commemorate ‘Azadi ka Amrit Mahotsav’.
The 40,000-tonne aircraft carrier (IAC 1), the largest and most complex warship India has ever built, will be called INS Vikrant once it enters service with the Indian Navy.
The indigenous design and construction of the aircraft carrier by Indian Navy and Cochin Shipyard Ltd is a shining example in the nation’s quest for ‘AatmaNirbhar Bharat’ and ‘Make in India Initiative’ with more than 76 per cent indigenous content. This has led to growth in indigenous design and construction capabilities, besides development of large number of ancillary industries, with employment opportunities for over 2000 CSL personnel and about 12,000 employees in ancillary industries.
The IAC completed its maiden sea trials in August 2021. This was followed by second and third phases of sea trials in October last year and January 22, respectively.  During these three phases of sea trials, endurance testing of propulsion machinery, electrical and electronic suites, deck machinery, lifesaving appliances, ship’s navigation and communication systems was undertaken.
The IAC 1 is named after INS Vikrant, India’s first aircraft carrier which was acquired from the United Kingdom in 1961. It played a key role during the 1971 war with Pakistan, which led to the creation of Bangladesh.
It was decommissioned in 1997. Now, India’s first homemade aircraft carrier will carry the name of its illustrious predecessor.
IAC-1 has also enabled India to showcase the tremendous growth in the indigenous design and construction capabilities of building such a large and wide aircraft carrier.
The only operational aircraft carrier with the Indian Navy at present is the INS Vikramaditya, which had served in Russian navy as Admiral Gorshkov in the erstwhile Soviet Union and, before being acquired by India in 2013.
MORE REPORTS