Indian Navy has deployed two warships in the Gulf of Oman and the Persian Gulf to ensure security of Indian vessels amidst rising tensions between Iran and the United States, and the recent incidents of attacks on oil tankers in the Strait of Hormuz. 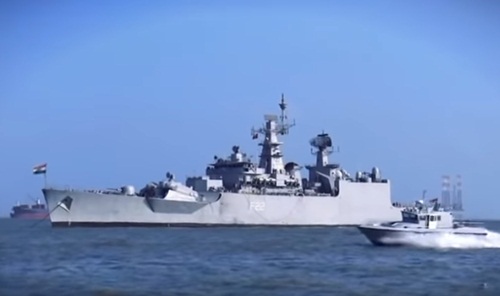 The Navy has also beefed up aerial surveillance in the area to reassure Indian vessels operating and transiting in the region, the Navy said on Thursday.
"INS Chennai and INS Sunayna have been deployed in the Gulf of Oman and the Persian Gulf to undertake maritime security operations. In addition, aerial surveillance by IN aircraft is also being undertaken in the area," the Navy said.
The Navy’s Information Fusion Centre for the Indian Ocean Region at Gurgaon, which was inaugurated in December 2018, is also keeping a close watch on the movement of ships in the Gulf region, it added.
India's strategic interests and energy security are closely linked to the safety and security of ships operating and transiting in the Gulf of Oman and the Persian Gulf.
"The Indian Navy has deployed warships in the Gulf of Oman to re-assure the Indian Flagged Vessels operating/transiting through the Persian Gulf and the Gulf of Oman, following the maritime security incidents in the region," the navy said.
The US military had earlier accused Iran of firing a missile at two oil tankers near the Gulf of Oman. The US blamed Iran for the attacks on it drones as well, charges that Tehran has denied.
Yesterday’s shooting down of a US spy drone by Iran's Revolutionary Guards further escalated tensions.
Reports say President Donald Trump had ordered strikes on Iran, Only toretract it later.
India’s Director General of Shipping issued two advisories on 13 and 16 June Indian-flagged vessels operating in the Strait of Hormuz and the Persian and Arabian Gulf, asking them to undertake appropriate protection measures.
"The Indian Navy remains committed to ensuring the safety of Indian maritime trade and merchant vessels operating in the region and contributing towards maintaining a stable and peaceful Indian Ocean Region," the Navy said.
Reports, meanwhile, said the Navy also plans to deploy an officer and 2 sailors each onboard Indian crude oil tankers operating in the Persian Gulf. These teams would escort Indian crude oil tankers in and out of the Straits of Hormuz.
Indian Navy teams will fly onto the tankers if they have a helicopter deck or embark them by boat.
Around five to eight Indian crude oil carriers, including Ultra Large Crude Carriers, enter and exit the Persian Gulf every day. Around 63.29 per cent of India's crude oil flows come from the Gulf, mainly from Iraq, Saudi Arabia, the UAE, Kuwait and till recently Iran.
The Director General of Shipping, the Indian Ship Owners Association and the Indian Navy are meeting this afternoon to discuss the situation.
MORE REPORTS