India’s first indigenous aircraft carrier (IAC-1) is expected to be inducted into the Indian Navy in 2020, Flag Officer Commanding-in-Chief of the Eastern Naval Command, Vice-Admiral Karambir Singh said on Monday. 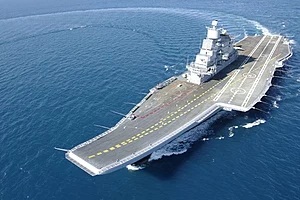 He said the new aircraft carrier will be based with the Eastern Naval Command based in Visakhapatanam and that the Navy was building the required infrastructure like berthing facilities and associated services at the ENC for IAC-1.
A MiG-29 squadron would also be positioned at the ENC once the IAC-1 was inducted, he said.
Addressing a press conference onboard the INS Sahyadri on the eve of Navy Day, Singh said IAC-1 was currently being built in Kochi under the Maritime Capability Perspective Plan.
While the refurbished INS Vikramaditya has already been inducted in line with this plan, IAC-1, the first of the two aircraft carriers planned, is under construction, he said.
"The case for IAC-2 is being progressed to meet all future requirements without any degradation in force levels," he added.
"In keeping with the country's maritime interests, the Navy has a requirement of two operational aircraft carriers. The Maritime Capability Perspective Plan envisages a force level of three aircraft carriers to ensure availability of at least two Carrier Battle Groups at any given time," the Vice-Admiral said.
Plans were also afoot to build a 10,000-ton ship-lift facility at the Naval Dockyard here. Once commissioned, this would be the second such facility in the country after the one at Karwar, he said.
Singh said orders were issued for building 27 warships and submarines under the Make in India initiative that would aid the capability building programme of the Navy.
"On an average, four to five warships, including submarines, are normally inducted in a year. So, the new ones are expected to be inducted in the next five or six years," he said, in reply to a question.
On the increasing positioning of rival warships in the Indian Ocean region, the ENC chief said they too enhanced deployment of ships, submarines and aircrafts.
"We have transitioned to mission-based deployments, aimed at maximising our time at sea with defined outcomes. We also have automatic identification systems in place, especially in 'choke points' like the Malabar Straits," he said.
"Having designated our role in the Indian Ocean Region as the net security provider, the aim of these deployments is to have presence in relevant areas so as to secure our maritime interests and also assure our friends in the region that we are available to assist in the event of a developing situation," the Vice Admiral said.
MORE REPORTS