Vladimir Putin seeks lawmakers' permission to use force outside Russia

Russian President Vladimir Putin has sought lawmakers’ permission for use of force outside Russia, even as he raised the stakes in the Ukraine standoff by recognising the independence of rebel regions in that country's east. 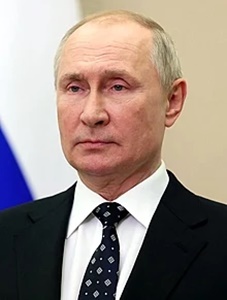 Putin's move to sign a decree recognising Donetsk and Luhansk (Donbass) as independent regions, means that Moscow no longer recognises these two regions as part of Ukraine. It will pave way for Russian military forces to enter into these separatist-dominated regions claiming to be an ally of the rebels.
While it does not sound like an imminent threat of war, the separatists may take Russian military help to take control of Donetsk and Luhansk from Ukrainian forces. This in turn can become the flashpoint of a larger military conflict between Russia and Ukraine.
Putin's Ukraine move also junks the 2014-15 Minsk peace agreement, which, though unimplemented, was so far, respected by Moscow.
US President Joe Biden said the Russia move is the beginning of an invasion of Ukraine and announced the first wave of sanctions against. He also vowed steeper punishments if Russia continues its aggression. US has the backing of the 27 EU member nations who agreed to levy their own sanctions on Russia.
While the US President has repeatedly clarified that the US will not be sending troops into Ukraine, the US has been providing military aid worth millions of dollars to Kyiv. Last week, US Secretary of State Antony Blinken said that Russia's recognition  "would further undermine Ukraine's sovereignty and territorial integrity, constitute a gross violation of international law, (and) call into further question Russia's stated commitment to continue to engage in diplomacy to achieve a peaceful resolution of this crisis".
Putin has repeatedly said that he does not intend to invade Ukraine, but his actions so far are unlikely to convince the West. While a military response from the West has been ruled out so far, US President Joe Biden has already responded with sanctions barring Americans to carry out investments in Ukraine's breakaway regions. A larger involvement of military allies cannot be ruled out in case of an occurrence of a flashpoint.
Western countries have sought to back up their tough words over Russia's aggression against Ukraine, announcing financial sanctions, trade and travel bans and other measures meant to pressure Moscow to pull back from the brink of war.
Asian and Pacific nations, on the other hand, are preparing for the possibility of both economic pain, in the form of cuts to traditional energy and grain supply lines, and retaliation from Russian cyber attacks.
"We can't have some suggestion that Russia has some just case here that they're prosecuting. They're behaving like thugs and bullies, and they should be called out as thugs and bullies," Australian Prime Minister Scott Morrison said while announcing targeted financial sanctions and travel bans as a first step in response to Russian aggression toward Ukraine.
MORE REPORTS