Delhi chief minister Arvind Kejriwal today said the situation in Delhi has become “alarming” after the toll in the communal violence over the Citizenship Amendment Act (CAA) in northeast Delhi rose to 20. Kejriwal flagged concern that the Army might have to be called in as police is “unable to control it”. 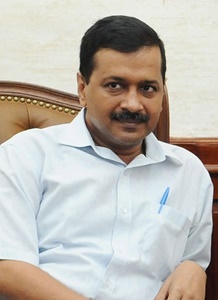 Kejriwal said the situation has become “alarming”, adding that he is writing to union home minister Amit Shah. “I have been in touch with large number of people whole night. Situation alarming. Police, despite all its efforts, unable to control situation and instill confidence (sic),” Kejriwal tweeted. “Army shud (should) be called in and curfew imposed in rest of affected areas immediately. Am writing to Hon’ble HM to this effect,” he added.
The Delhi Police late on Tuesday issued shoot-at-sight orders in four areas of northeast Delhi — Bhajanpura, Maujpur, Khureji Khas and Chand Bagh — where looting, arson and rioting of unprecedented scale were reported throughout the day even as the toll in the violence over the Citizenship Amendment Act (CAA) climbed to 24 on Wednesday.
The orders were issued after the union home ministry appointed SN Shrivastava, a 1985-batch IPS officer, as Special Commissioner (Law and Order), Delhi.
Police also cleared the Jaffrabad metro station of women anti-CAA protests camping there since Saturday, leading to counter-agitations on Sunday that triggered the violence.
The flare-up after Monday night with incidents of arson, looting and setting vehicles and shops on fire in several localities like Chand Bagh, Bhajanpura, Gokulpuri, Maujpur, Kardampuri and Jaffrabad also saw pitched battles between members of two groups who hurled petrol bombs and even opened fire.
National Security Adviser (NSA) Ajit Doval marched through the affected areas late last night and also took stock of the situation, sources said.
According to Guru Teg Bahadur Hospital authorities, the number of dead has risen to 20 while the number of injured has gone up to 189, although the situation at the hospital “seems to be settling”.
The toll from communal violence over the CAA has risen from 13 on Tuesday to 20 today (Wednesday), PTI quoted Medical Superintendent of GTB Hospital, Sunil Kumar, as saying.
Police struggled to check the rioters who ran amok on streets, burning and looting shops, pelting stones and thrashing people, as the communal flare-up over the CAA escalated in north-east Delhi.
Earlier, at least four bodies were brought to the Guru Teg Bahadur (GTB) Hospital from the Lok Nayak Jai Prakash Narayan Hospital (LNJP) Hospital, a senior official said. Later, while interacting with reporters, GTB MS said, from Tuesday midnight it is a “trickle of patients and not a gush of injured persons as was earlier”.
There are people with several kinds of injuries, including from gunshots, while many sustained trauma from jumping from rooftops to escape violence, he said, adding that many received head injuries, as well. “We are fully prepared with doctors, nurses, paramedics, consumables, linen and other paraphernalia and hoping that the situation won’t worsen from here,” he said.
Asked if the victims have been identified, Kumar said, “Many people have been identified, some are yet to be”.
Meanwhile, Section 144 was imposed in parts of the city and shoot-at-sight orders were in place in northeast Delhi as of Tuesday evening. Home minister Amit Shah held a three-hour meeting with top MHA officials and Delhi Police representatives to take stock of the situation.
At midnight, Delhi Police Special Commissioner Satish Golcha said the protesters have left the Jaffarabad metro station and added that the Maujpur Chowk was also clear. "Now, 66 Futa road is absolutely clear of all protests," he said. Earlier, there were reports of stone pelting in Laxmi Nagar, however, the mob dispersed shortly later.
Home minister Amit Shah cancelled his planned trip to Kerala and held a three-hour meeting with Delhi Police and home ministry officials. Newly appointed Special Commissioner of Police SN Srivastava was also present. The meeting lasted for three hours and according to sources, heads are expected to roll over Delhi violence. Shah has held three meetings over the past 24 hours.
National Security Advisor (NSA) Ajit Doval took stock of the situation in the national capital. Doval held a meeting with Delhi Police officials and chaired a meeting at DCP north-east office.
MORE REPORTS