US President Donald Trump today said he stood ready to mediate between India and Pakistan over the Kashmir issue even as he said that India and the United States will work together against terrorism and together both the countries are making all possible efforts towards it. 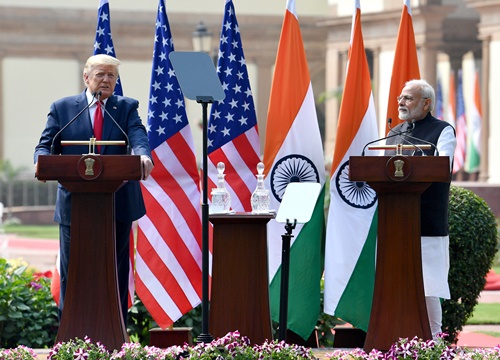 On the second day of his maiden visit to India, the US President stressed on the need for an India-US trade deal even as he praised Prime Minister Narendra Modi saying, ''You have a very special Prime Minister, he really knows what he is doing", President Trump also interacted with business leaders in Delhi after which he addressed media at a press conference held in the US Embassy.
Addressing the media, the President touched upon the India-Pakistan row and said Kashmir obviously is a big problem between India and Pakistan, they are going to work out their problem. They have been doing it for a long time.
Trump said. “I have good equation with Pakistan PM Imran Khan, they are working to control cross-border terrorism:
The US President also said, ''I don't think anyone has done more than I did on containing radical Islamic terrorism'' while addressing media in Delhi.
Ready to mediate on Kashmir issue if India and Pakistan agree on it: US President Donald Trump while addressing media in Delhi
If you look back India has worked hard for religious freedom. PM Modi wants people to have religious freedom in India: US President Donald Trump while addressing a press conference in Delhi.
On CAA, he said, ''I want to leave that to India and hopefully they will make the right decision for their people.''
''Did not discuss CAA with PM Modi'', said President Trump while addressing media in Delhi.
India, he said, is buying a lot of military equipments from the US. But he said, ''India is probably nation with highest tariffs, Harley Davidson has to pay huge amount of tariff.''
The US President was earlier given a ceremonial welcome at Rashtrapati Bhawan after which he went to Rajghat along with First Lady Melania to pay homage to Mahatma Gandhi. In the evening, President Trump will take part in the grand dinner programme being organised in the Rashtrapati Bhawan.
The President's Banquet for Donald Trump is scheduled to start at 7.30 pm at Rashtrapati Bhawan. Around 90 to 100 guests are expected to attend the Banquet. Both US President and Indian President will make a short speech. A multi-course menu has been prepared for Trump and his delegation.
Prime Minister Narendra Modi and President said there was useful and comprehensive discussion on trade and that there was an appreciation that it increased steadily year on year over the last few years - US exports to India had a fairly dramatic increase.
What we have done for the healthcare sector is phenomenal, Trump said while addressing a press conference, adding that both countries are working out a trade deal and negotiations have already begun.
Our teams have made tremendous progress for a comprehensive trade agreement and I'm optimistic we can reach a deal of great importance to both countries. Since I took office, US exports to India are up nearly 60 per cent and exports of high quality American energy have grown by 500 per cent, he said.
Earlier today we expanded our defence cooperation with agreements for India to purchase more than $3 billion of advanced American military equipment, including Apache and MH-60 Romeo Helicopters - finest in the world. These will enhance our joint defence capabilities,Trump said.
Prime Minister Modi said the most important foundation of the special relationship between India and the USA is people to people contact. Professionals, students, the Indian diaspora in USA have a major contribution in this. We've also agreed to start negotiations on a massive trade deal. We hope that we will get positive results, benefitting both. At the global level, our relationship is depended on the similar democratic values we share, he said.
MORE REPORTS