The Easter Sunday bombings in Sri Lanka that left 359 people dead and several hundred wounded has lead to a leadership crisis in the island nation with President Maithripala Sirisena taking charge and opening the chances of Mahinda Rajpaksha usurping the office of the prime minister once again. 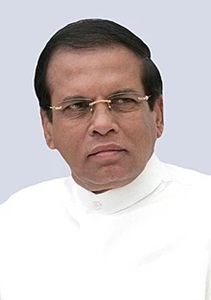 Mahinda Rajapaksa, a former president of Sri Lanka and his brother, the then defence secretary, had crushed Tamil Tiger separatists ruthlessly ten years ago that led to his election loss and demands by Western powers for was crime trials against the two.
President Maithripala Sirisena last year tried to reinstate him through the backdoor after sacking the government of Prime Minister Ranil Wickremesinghe.
It was the judiciary’s intervention that helped bring Wickremesinghe back to power despite the President’s opposition.
Amidst allegations of intelligence failures and ISIL claims of responsibility for deadly Easter Sunday blasts, President Sirisena said he would oversee a 'complete restructure' of police and security forces in 'coming weeks'
Sri Lanka's president has vowed to conduct a major shake-up of the country's security establishment after its failure to prevent the Easter Sunday bombings that killed more than 320 people, despite some officials apparently having prior information about the attacks.
In a televised address to the nation today, President Maithripala Sirisena said he would make "major changes in the leadership of the security forces in the next 24 hours".
He also pledged a "complete restructure" of police and security forces in the "coming weeks", and alleged intelligence officials had failed to inform him of prior information concerning possible attacks.
"The security officials who got the intelligence report from a foreign nation did not share it with me," Sirisena said.
Indian intelligence agencies are reported to have tipped off Sri Lankan intelligence officials twice earlier about a possible attack and about the imminent attack hours before Sunday's blasts.
Earlier on Tuesday, Sri Lanka's Prime Minister Ranil Wickremesinghe also said he received no information regarding a possible attack from security officials, but confirmed authorities had received intelligence about the blasts that struck churches and luxury hotels.
Speaking at a press conference, Wickremesinghe also cautioned that more explosives and would-be attackers remain "out there" after Sunday's bombings.
MORE REPORTS