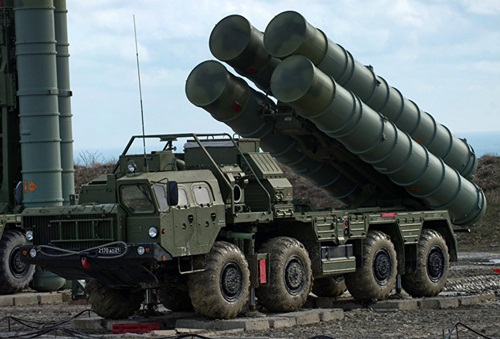 India and Russia are expected to sign defence deals worth $10 billion, including a $8.5 billion deal for the S-400 missile defence system, during Putin’s visit next month.
The US has warned that the S-400 missile defence system that India intends to buy would be a “focus area” for it to implement punitive sanctions against a nation undertaking “significant” business deals with the Russians.
The Act primarily deals with sanctions on Russian interests such as its oil and gas industry, defence and security sector, and financial institutions, in the backdrop of its military intervention in Ukraine and its alleged meddling in the 2016 US Presidential elections.
"We urge all of our allies and partners to forgo transactions with Russia that would trigger sanctions under CAATSA," a US state department spokesperson said on Wednesday when asked about India's plan to purchase multi-billion S-400 missile defense system from Russia.
"The administration has indicated that a focus area for the implementation of CAATSA Section 231 is new or qualitative upgrades in capability - including the S-400 air and missile defense system," the spokesperson said.
India and Russia were expected to sign a deal for the multi-billion-dollar S-400 surface-to-air missile system, Russia’s most advanced air defence system, during the visit of Russian President Vladimir Putin, who will reach New Delhi today for the annual India-Russia summit on 4-5 October.
Moscow has been negotiating to sell the S-400 long-range surface-to-air missiles to India for months.
Last month, the Donald Trump administration had imposed sanctions on China under Countering America's Adversaries Through Sanctions Act or CAATSA for buying fighter jets and missile defence system from Russia. CAATSA was signed into law last August. The CAATSA aims to counter Russia’s “malign activity” around the world.
On Wednesday, the union cabinet chaired by Prime Minister Narendra Modi approved signing of a Memorandum of Understanding (MoU) between National Small Industries Corporation Ltd (NSIC) - a public sector undertaking under the ministry of micro, small and medium enterprises (MSME) and JSC-Russian Small and Medium Business Corporation (RSMB Corporation). The MoU will be signed during the upcoming visit of Russian President to India.
The MoU aims at enhancing enterprise to enterprise cooperation and help initiate sustainable business alliances in terms of technology transfers, joint ventures and business partnerships in MSME sector between the two countries. Cooperation in the field of capacity building, rapid incubation for entrepreneurship development, exposure to each other's market by encouraging participation in exhibitions are also envisaged in this MoU.
The cabinet also approved an MoU between India and Russia on bilateral cooperation in the road transport and road industry to be signed during the upcoming visit of the Russian President.
MORE REPORTS