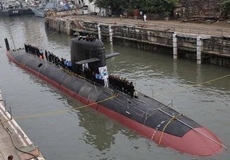 The restriction will be in place till Thursday, the media reported on Monday.

DCNS, which is at the centre of a global submarine data leak scandal, wanted to prevent the Australian publication from releasing any more confidential data contained in 22,400 secret documents because it may cause harm to its customer, the Indian Navy.

The company is also seeking a court order to force The Australian to hand over the documents and remove them from its website (DCNS may go to court against publication of Scorpene leaks).

"The publication of this highly valuable document causes a direct harm to DCNS and its customer in terms of spread of sensitive and restricted information, image and reputation," said an affidavit by DCNS' lawyer Justine Munsie.

In response to an email from IANS, DCNS' Media Relations head Emmanuel Gaudez said, "To be precise, DCNS is instructing a demand to The Australian in order to remove from its website the documents which it has published online and prevent the publishing of other documents."

The Australian has redacted the most sensitive details from the documents before their publication.

Meanwhile, the Indian Navy's top officers have said that they do not expect the project to be delayed and that the first Scorpene vessel, INS Kalvari, which is currently undergoing sea trials, will be inducted by the year-end.

Navy Chief Admiral Sunil Lanba on Monday said the leak is being taken "very seriously" and that mitigation measures will be taken based on the report of a committee examining the documents.

The Indian Navy has maintained the leaked data will not compromise the boat's stealth capabilities, and an officer told IANS that if needed, India is capable of making suitable changes in the submarines keeping in mind the "worst-case scenario".