India asks its citizens to leave Saudi city of Najran

The government's move comes after missile attack on the province by Houthi rebels from Yemen, across the border. 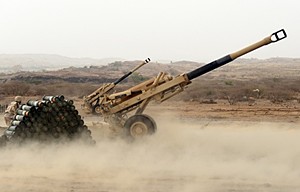 "Now that shelling has stopped, all Indians in conflict zone in Najran may please leave immediately," Swaraj said in a tweet on Wednesday last.

Nearly 30,000 Indians live in the Saudi Arabian city of Najran, bordering strife-torn Yemen, and reports quoting Indian consul general in Jeddah B S Mubarak said they are all safe.

However, the official said, all Indians living close to the firing range have been asked to move to safer places.

A senior Indian diplomat and other staff had been posted in Najran to cater to the Indians living there, he said.

According to reports, around 100 Indians were caught in crossfire between Houthi rebels and Saudi Arabia-led coalition forces.

However, four members of Saudi security forces were killed, including two officers, as forces pushed against another attack on the southwestern city of Jizan, Al Arabiya reported. The counterattack also killed dozens of militiamen loyal to Houthis and Saleh.

A security official described the attack as a ''failure,'' adding that Saudi-led coalition warplanes aided in pushing back the militants.

However, India is not discounting dangers and external affairs ministry spokesperson Vikas Swarup said Indian consulate in Jeddah is in close touch with Saudi authorities and the Indian community.

"With reference to the situation in Najran, our consulate in Jeddah is in close touch with Saudi authorities and Indian community," he said.

He was responding to a report published by a local media, which said India had suspended sending workers to Saudi Arabia, citing a Saudi labour directive that 25-per cent of all foreign manpower must be housemaids.