New Delhi: Beijing's effort to block oil and natural gas exploration in two Vietnamese blocks in the South China Sea by India's ONGC Videsh Ltd (OVL) has been repulsed by New Delhi. In a rare display of toughness India's ministry of external affairs (MEA) said China's objections have ''no legal basis'' as the blocks belong to Vietnam. 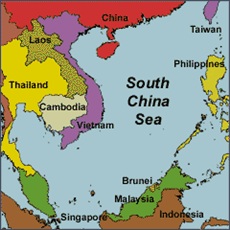 Earlier, through a demarche, Beijing had stated that unless its permission is taken for exploration in Blocks 127 and 128, OVL's activities there would be illegal.

MEA officials say an appropriate reply has already been forwarded to Beijing but the issue would be discussed during the visit of external affairs minister SM Krishna to Vietnam on 16 September.

They said, so far, they were going by what they had been informed by Vietnamese authorities.

According to MEA sources, Vietnam has cited sovereignty rights over Blocks 127 and 128 according to the United Nations Convention on the Law of the Sea, 1982.

There are many potentially oil- and gas-rich sites in the South China Sea, but they are almost all embroiled in disputes with several countries, apart from China and Vietnam as claimants.