Indian Air Force today successfully flight tested the air-to-air Astra missile, off the Odisha coast. The test was carried out from a Sukhoi-30 MKI fighter jet, as part of user trials. 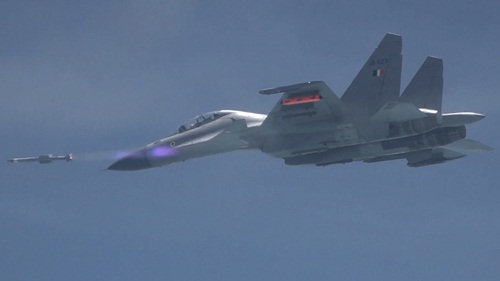 The live aerial target was engaged accurately demonstrating the capability of first indigenous air-to-air missile.
"The live aerial target was engaged accurately demonstrating the capability of the first indigenous air-to-air missile," the ministry of defence said in a statement.
The mission profile was executed in a text book manner. Various radars, electro-optical tracking system (EOTS) and sensors tracked the missile and confirmed its engagement with target, said the release.
Astra is an indigenous beyond visual range air-to-air missile, with a range of over 70 km. The missile can fly towards its target at a speed of over 5,555 kilometres per hour. It has a 15-kilogramme high-explosive pre-fragmented warhead.
The Astra missile has been developed by Defence Research and Development Organisation along with 50 other public and private organisations, involved at various stages of its development. Modifications of the Sukhoi-30 MKI jets to accommodate Astra missiles has been carried out by Hindustan Aeronautics Limited (HAL).
Defence minister Rajnath Singh congratulated DRDO and Air Force teams for the successful test.
MORE REPORTS