Japanese motorcycle manufacturer Yamaha on Wednesday launched its top-end superbike, the 1,680cc VMAX, in the country. Priced at Rs20 lakh in New Delhi, it is the most expensive bike to be launched in India so far. 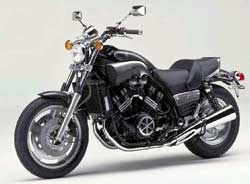 Simultaneously, it launched the limited edition 'Frazer' and 'FZ' series motorcycles. The company also announced plans to increase its exports from India and launch at least two new bikes every year in the Indian market.

VMAX comes with an all-new liquid-cooled four-stroke engine that showcases some of Yamaha's cutting-edge engine and chassis technology. Notwithstanding its steep price, the company has already got nine bookings and hopes to close the year with 25.

"India is one of the key markets for Yamaha. We are constantly shifting gears to transform the market from utility to pleasure and lifestyle. With the launch of all-new VMAX, Yamaha brings a new credo for the bikers in India, while the limited edition of high demand models Fazer and FZ have been introduced keeping in mind the demand from bikers,'' Yamaha Motor India chief executive Yukimine Tsuji said after unveiling the bike in the presence of the company's re-appointed brand ambassador John Abraham.

Yamaha already sells two expensive bikes in India, 1670cc MT01 and 998cc YZF-R1 - both priced above Rs12 lakh. Tsuji said the company has sold 100 units of the R1 and 50 units if the MT01 so far. "While we do not expect sale of many units, we believe there is a set of enthusiasts in India which is interested in brands like the VMAX. This is like a dream bike for them, something like a Porsche is in cars," he said.