What do the world's largest retailer Walmart and India's largest online marketplace have in common? Both arrived in india in 2007. 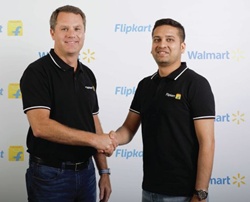 Walmart CEO Doug McMillon (left) and Flipkart cofounder Binny Bansal
While Flipkart came into being as an online bookstore, much as Amazon had done, selling 20 copies of John Wood’s Leaving Microsoft to Change the World Walmart  entered India through a joint venture with Bharti Enterprises in 2007, much before opening its first store in India in Amritsar, Punjab, in May 2009.
Ten years later, Flipkart crossed 100-million registered users mark (today, it has over one lakh registered sellers and 21 warehouses), while Walmart India opened its first Fulfillment Centre, in Mumbai in 2017.
And, in 2018, Flipkart joined Walmart, when Walmart Inc announced on 9 May it had signed definitive agreements to become the largest shareholder in Flipkart Group.
The acquisition of the majority stake makes the $500-billion Walmart the largest shareholder of the Bengluru-based Flipkart group and will help accelerate its ambition to transform e-commerce through digital technology.
With platforms such as Myntra, Jabong and PhonePe, Flipkart will leverage its integrated ecosystem of localised service, customer insights and an efficient supply chain through its eKart supply chain arm, which operates in 800 cities, making 5,00,000 deliveries daily.
In 2017-18, Flipkart recorded gross merchandise value of $7.5 billion and net sales of $4.6 billion — a 50 per cent year-on-year growth.
Through the deal, Flipkart will leverage Walmart's omni-channel retail expertise, grocery and general merchandise supply-chain knowledge and financial strength, while its technology, customer insights and innovative culture will benefit the US retail giant in India and elsewhere.
“India is one of the most attractive retail markets in the world, given its size and growth rate, and our investment is an opportunity to partner with the company that is leading transformation of eCommerce in the market,” said Doug McMillon, Walmart’s president and chief executive officer.
The Bentonville- (Arkansas) based company said in a statement, "The investment will help accelerate Flipkart's customer-focused mission to transform commerce in India through technology and underscores Walmart’s commitment to sustained job creation and investment in India, one of the largest and fastest-growing economies in the world."
Subject to regulatory approval in India, Walmart will pay approximately $16 billion for an initial stake of approximately 77 per cent in Flipkart Private Limited.
The remainder of the Flipkart stake will be held by some of Flipkart’s existing shareholders, including Flipkart co-founder Binny Bansal, Tencent Holdings Limited, Tiger Global Management LLC and Microsoft Corp.
Significantly, Flipkart cofounder Sachin Bansal,  and Masayoshi Son's Softbank will divest their respective stakes. While Bansal holds around 5.5 per cent, Softbnk, through its Vision Fund, holds around 20.68 per cent.
The immediate focus for Walmart will be on serving customers and expanding Flipkart's business, Walmart supports Flipkart’s ambition to transition into a publicly-listed, majority-owned subsidiary in the future.
McMillon added, “As a company, we are transforming globally to meet and exceed the needs of customers and we look forward to working with Flipkart to grow in this critical market. We are also excited to be doing this with Tencent, Tiger Global and Microsoft, which will be key strategic and technology partners. We are confident this group will provide Flipkart with enhanced strategic and competitive advantage. Our investment will benefit India providing quality, affordable goods for customers, while creating new skilled jobs and fresh opportunities for small suppliers, farmers and women entrepreneurs.”
Binny Bansal, Flipkart’s co-founder and group chief executive officer, said, “This investment is of immense importance for India and will help fuel our ambition to deepen our connection with buyers and sellers and to create the next wave of retail in India. While eCommerce is still a relatively small part of retail in India, we see great potential to grow.”
MORE REPORTS