Walmart to announce Flipkart deal this week, to acquire 70-75% stake with Google

The world's largest retil chin Walmart, along with Google’s parent company Alphabet, is expected to acquire 70-75 per cent stake in the Indian e-commerce business, and announce the deal before the end of this media, Moneycontrol and Livemint reported separately. 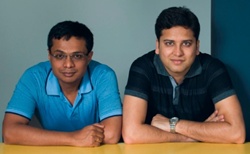 Flipkart co-founder Sachin Bansal (left) and Binny Bansal
The Flipkart group includes fashion portals Myntra-Jabong, online payments business PhonePe and logistics firm Ekart.
According to Moneycontrol, the deal price would be around $15, which is likely to value Flipkart at $20 billion. Walmart is also likely invest $2 billion directly by infusing fresh equity in Bengaluru-based Flipkart.
Walmart will acquire about a 60-per cent stake, while Alphabet will take around 15 per cent for about $3 billion, Reuters reported.
A Reuters report had earlier said that Walmart was in advanced talks to acquire 51 per cent or more of the e-commerce player for $10 billion to $12 billion, valuing Flipkart at some $18 billion to $20 billion.
Co-founder and executive chairman Sachin Bansal is expected to exit completely, selling his 5.2-per cent stake, when the Walmart deal is finalised. (See: Sachin Bansal likely to quit Flipkart if Walmart stake sale goes through).
Till a fortnight back Bansal had no plans to exit the company and was reported to be eyeing a larger role in the entity.
Founders Sachin Bansal, 36 and Binny Bansal, 35, are not related. A batch apart in the Indian Institute of Technology-Delhi, they became friends as colleagues in Amazon before starting Flipkart in Bengaluru as an online bookstore in 2007 before going on to become the country's preeminent ecommerce company.
Flipkart’s shareholders  China’s Tencent Holdings, and US-based Tiger Global Management, will exit partially and retain small stakes, while South Africa-based Naspers Ltd and Microsoft Corp will also keep a small stake in the new company.
They will, however, have the option of selling their stake to Walmart later at the same valuation at which Walmart bought a majority stake in Flipkart.
SoftBank, which owns 20.8 per cent stake in Flipkart through its Vision Fund will exit completely, netting a 60 per cent profit on the $2.5 billion investment, through primary and secondary share purchases in 2017 (See: SoftBank Vision Fund invests $2-2.5 bn in Flipkart).
Tencent Holdings and Tiger Global Management will continue to be represented on the board.
MORE REPORTS