Pharmaceutical and biotechnology major Wockhardt Limited has received the Government of India award for the maximum number of patents filed and granted in India by any pharmaceutical company.

Wockhardt has received a total of 70 patents, 15 from the Indian and 55 from the American and European patent offices. 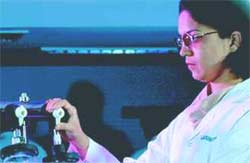 Minister of commerce and industry Anand Sharma will present the award tomorrow at a function in Hyderabad.

"This award is a recognition of Wockhardt's robust, resilient and uncompromising intellectual pursuit in discovering new ways and methods of medical innovation," Wockhardt chairman Habil Khorakiwala said. "This also recognises the efforts of over 500 scientists working in our research and development centres involved in the research of biotechnology, new drug discovery, new technology in pharmaceutical and medicinal chemistry," he added.

Wockhardt has five research centres and 14 world-class manufacturing plants across various countries and continents that are compliant to international regulatory standards such as the US FDA, MHRA and other global regulatory bodies.

With end-to-end integrated production capabilities, starting with manufacture of the oral and sterile APIs, the dosage forms and a marketing subsidiary in the US, Wockhardt has a global footprint across the US, the UK, Ireland and France and a multi-ethnic workforce from 14 different nationalities