Wipro, the country's third-largest software exporter, has reported a net profit of Rs2,077 crore on revenues of Rs13,626 crore for the April-June 2017-18 quarter of the current financial year. 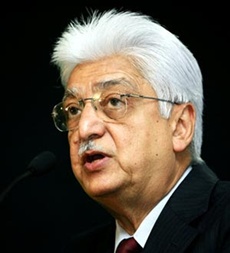 The Bengaluru-based technology major said its first quarter profits rose 1.2 per cent agaonst Rs2.051.9 crore in the previous year quarter while revenues were higher by 0.2 per cent during the first quarter of the current fiscal.

Wipro had issued a revenue guidance of a negative 2 per cent to flat growth of $1.95 billion in the current quarter, however, saw its information technology (IT) services revenue, calculated in dollar (the currency in which it bills majority of its customers), rising 0.3 per cent to $1.97 billion.

IT services' operating profit margin for the quarter was 16.8 per cent, a drop of 100 basis points, compared to 17.8 per cent in the year-ago period and also lower than 18.3 per cent in the March quarter. The decline in margins has been due mainly to the appreciation of the rupee against the dollar and impact of wage hikes that it gave in June, Wipro said.

''On the back of a quarter of good execution, we expect the momentum to continue. While the core business continues to improve, regulatory uncertainties in the healthcare payer market are causing headwinds. We continue to build momentum towards Q4 and aim to be at industry level growth rates in Q4,'' said Abidali Z Neemuchwala, chief executive officer of Wipro.

Wipro also announced a share buyback of Rs 11,000 crore, becoming the fourth Indian IT services firm to announce a buyback after TCS, Infosys and HCL Technologies as there have been sluggish returns on IT stocks.

While IT major TCS announced a buyback of shares worth Rs16,000 crore last week to repurchase 56.1 million shares at Rs2,850 each, Infosys said it would spend as much as $2 billion in either share buyback or dividends to shareholders this financial year.

Wipro's buyback announcement lifted its American Depositary Receipt (ADR) by 5.1 per cent on the NYSE on Thursday.