German automobile maker Volkswagen AG bounced back with a $5.4-billion net profit in 2016 after suffering a loss the previous year because of payment of penalties related to a diesel-emissions scandal, figures released by the company on Friday showed. 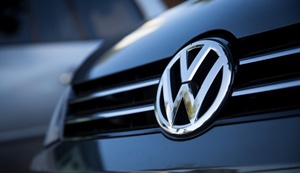 The company reported a net profit of $5.4 billion (€5.1 billion) attributable to Volkswagen AG shareholders last year, compared with a net loss of almost €1.6 billion euros in 2015.

Chief executive Matthias Mueller said the company has turned a corner and is out of the emissions scandal that led to scores of lawsuits and investigations.

''While the past fiscal year posed major challenges for us, despite the crisis, the group's operating business gave its best-ever performance,'' Mueller said. VW group sales rose by €4 billion to €217.3 billion ($229.5 billion) in 2016.

And despite the emissions scandal, the German auto giant said its car sales hit an all-time high, in the latest sign of its "dieselgate" scandal leaving its brand value unaffected.

The VW group, which includes the brands Porsche, Audi and Skoda, also reported record revenues of 217.3 billion euros, up nearly two per cent on the year before.

For 2016, the group said it planned to raise the dividend payout from €0.11 to €2 euros for preferred shareholders, and from €0.17 euros to €2.06 euros for ordinary shareholders.

VW said it expected the upward trend to continue in 2017, signalling a "moderate increase" in car sales and a four-per cent rise in revenues. "As the figures show, Volkswagen is very solidly positioned in both operational and financial terms. This makes us optimistic about the future," Mueller said.

The VW group plunged into crisis after it admitted in September 2015 to installing software in 11 million diesel engines worldwide designed to dupe emissions tests to make the cars seem less polluting than they were.

The controversy, which triggered mass recalls and a deluge of legal complaints, pushed VW into the red for the first time in more than 20 years in 2015 due to the provisions it had to set aside to cover the costs of the crisis.

The group today said it added another €4.4 billion euros to the recall provisioning in the last quarter of 2016, bringing the total amount set aside for re-fits, buy-backs, fines and compensation to Ç22.6 billion euros.

Volkswagen last month agreed to plead guilty to criminal charges in the United States, including fraud, which took the total payout on account of the emission scandal to more than $22 billion in fines and compensation to drivers, dealers and authorities in the US, where some 600,000 cars were equipped with the defeat devices.

Volkswagen, however, has not offered any compensation to the millions of European drivers affected.