More reports on: In the news, Cars 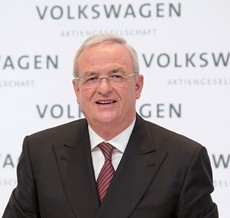 Martin Winterkorn, CEO of German carmaker Volkswagen AG, resigned on Wednesday amidst accusations that the car maker rigged US emission tests - the biggest scandal in its 78-year history.

''As CEO I accept responsibility for the irregularities that have been found in diesel engines and have therefore requested the Supervisory Board to agree on terminating my function as CEO of the Volkswagen Group. I am doing this in the interests of the company even though I am not aware of any wrong doing on my part.

''Volkswagen needs a fresh start - also in terms of personnel. I am clearing the way for this fresh start with my resignation,'' Winterkorn said in a statement.

He said he was shocked by events of the past few days, above all that misconduct on such a massive scale – what Twitter called `Dieselgate' - was possible at the company.

The US Environmental Protection Agency (EPA) said on Friday Volkswagen could face penalties of up to $18 billion for cheating emissions tests on some of its diesel cars.

US authorities are planning criminal investigations after discovering that Volkswagen programmed computers in its cars to lower the true emissions rates when they were being tested.

Diesel engines account for less than 3 per cent of new cars in the US but around half in Europe where the governments encourage use of fuel-efficient cars.

The story has sent shockwaves through the market, with dealers in the US reporting people holding back from buying diesel cars.

A five-member executive committee had grilled Winterkorn, 68, since morning at the company's headquarters in Wolfsburg, Germany. The company was under huge pressure to take decisive action.

Although the executive committee accepted chairman Winterkorn's offer to resign his position, it noted that Winterkorn had no knowledge of the manipulation of emissions data.

''The executive committee has tremendous respect for his willingness to nevertheless assume responsibility and, in so doing, to send a strong signal both internally and externally,'' the committee said, adding, ''Dr Winterkorn has made invaluable contributions to Volkswagen. The company's rise to global company is inextricably linked to his name.''

The executive committee said the supervisory board of Volkswagen AG will form a special committee to clarify further steps, including the preparation of the necessary consequences. In this regard, the special committee would make use of external advice, it added.

German Chancellor Angela Merkel, meanwhile, urged Volkswagen to move quickly to restore confidence in a company held up for generations as a paragon of German engineering prowess.

Though he took responsibility for the irregularities that had been found in diesel engines, Winterkorn said ''I am not aware of any wrong doing on my part.''

No immediate successor to Winterkorn was announced by the board, his replacement would be considered Friday, according to its executive committee, which included top shareholders.

The expansion, however, covered a profitability gap with rivals such as Toyota and mushrooming costs at the core Volkswagen which saw Winterkorn put together a conceived €5 billion savings programme in 2014.

An engineer by training, Winterkorn's hands-on management style had long been criticised  for production delays and a failure to adapt to local needs in key overseas markets.

According to commentators, multiple investigations into the US emissions debacle might also throw new light on Winterkorn's April feud with then chairman Ferdinand Piech, which ended in the VW patriarch's departure. Piech had repeatedly cited US problems as he took on Winterkorn, sources said at the time.